“It’s been years since I’ve blogged regularly. Let’s see if I start again now. (I might. It’s a good warm-up for writing and I’m looking forward to being a writer again.)” @neilhimself
I am trying the same, a regular blogging practice, which in hopes will get me writing daily.

It’s been almost two years since I’ve written anything in this space, but thanks to a tweet from my friend Jen Hanen (and okay, also some words from Neil Gaiman) I thought I’d give this another try. I attempted a newsletter but for whatever reason it never stuck. I don’t like the idea of writing on a set schedule, especially if I’m not being paid for it. I suppose I don’t think the flexing of my own spongy intellectual muscles is enough of a reason to keep up a writing habit, which if you want to get all deep about it, is a sign of my mental health and feelings of self-worth in general.

Yesterday on my way home from work, I passed an apartment building where someone had soaped a message onto their window. “This is a lonely place without friends,” the message read and it would have stopped me in my tracks had I not been in traffic. It made me wonder how much pain a person had to be in to go to such lengths to write this message on their window, in reverse no less, so that other people would see it. Vancouver can be a very lonely and isolating place, and yet I’m still here, still trying to reach out, still trying to make friends. I’m making more of an effort to see people than I have in the past, and that feels good. It’s almost like I’m rounding a corner or something.

Here are a few things I’ve read/listened to lately and enjoyed: 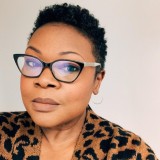